Ceiling systems by Zentia have provided form and function for an award-winning Grade A office building at the heart of one of the largest regeneration projects in the UK.

Zentia’s Cradle to Cradle™ certified mineral tiles were specified by regular Zentia users Falconer Chester Hall Architects for the Kingsgate building at Birkenhead in Wirral Waters which was built at a cost of £11.4 million. 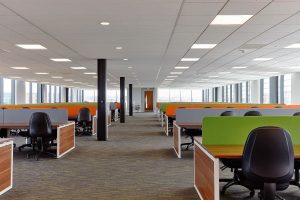 The decision to choose Zentia Ultima+ OP tegular tiles with Prelude 24mm XL2 grid was made simple due to the 30 year system warranty and both having Cradle to Cradle certificates helping achieve Kingsgate’s BREEAM Excellent rating.

Manufactured with up to 64% recycled content, the Ultima+ range is available in three core densities that allow specifiers to engineer sound absorption and attenuation for optimum acoustic performance – standard Ultima+ giving medium density, Ultima+ OP giving low density (both of these variables were used at Kingsgate) and Ultima+ dB giving high density, up to 41 dB.

Stephen Fieldsend of Falconer Chester Hall said the Zentia systems were specified to reduce acoustics in the open plan office areas which serve as the core business for The Contact Company in its role as a contact centre. Flexible open-plan office spaces allow greater flexibility for the call centre which takes up three of the four storeys, with offices and meeting rooms on the top floor. While its design concept references Liverpool’s past and the trading vessels that once negotiated the waters on its doorstep, the building remains forward focused on sustainability.

A heavily glazed façade reduces the building’s reliance on artificial light and this element is further helped by Zentia’s Ultima+ tiles which feature an even brighter whiter smoother surface with an 87% Light reflectance surface to help achieve 16% cost savings compared with indirect lighting*.